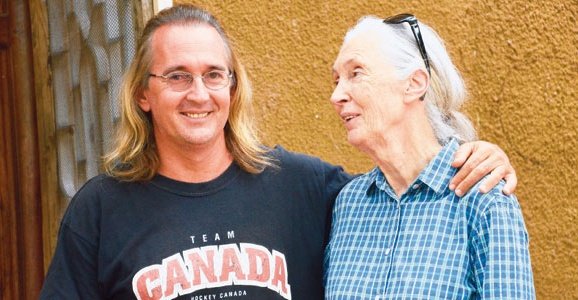 Grub’s mother Jane is a world-famous Primatologist and his father Hugo van Lawick was one of the most reputed and award-winning wildlife cameraman and producer.

He was born in Nairobi, Kenya

Grub was born in Nairobi, Kenya to Jane and her then late husband Hugo van Lawick. Source

He studied in England

Hugo Eric Louis (Grub) Van Lawick spent most of his childhood with his parents on the field. This as because Jane observed that Chimpanzee never leave their kids alone for first couple of years.

So Jane and her husband Hugo van Lawick who was alos her camera man took Grub with them to Gombe and to the Serengeti. He was able to spent a good portion of his childhood in wild with parents until later he was sent to school in England.

After studies, he returned back to Tanzania

After completing his studies he returned back to Tanzania but he was never interested in continuing his parents’ legacy. Neither he became Primatologist like his mother nor cameraman and producer like his late father.

He is a boat builder

He was more in art and craft so he continued that and started making boats. Grub also entered the fishing industries for a brief time but left in 2017.

According to African media outlet Daily News, when he left fishing it impacted the investors and workers in a negative way and 30 workers had to leave their job.

Jane’s son Grub lives in Dar es Salaam a city in Tanzania. The city is located in east Tanzania and faces the Indian ocean and it is one of the major cities and commercial ports.

Jane Goodall also lives nearby to son’s house, their compounds are attached.

He is married and has three children

Hugo Eric Louis returned back from England and he married a local Tanzanian women. Identity of Grub’s wife is unknown but they together have two kids.

Then in 2014, she went to Sonoma County in California to work with Doris Duncan, director of Wildlife Rescue, in placing orphaned barn owls with wild mothers at Lynmar Estate near Sebastopol. While in California in an interview she expressed her desire to attend college in Europe or the United States. Source

But that plan didn’t work and she returned back to Tanzania and completed her education from the University of Cape Town.

Grub’s son Merlin van Lawick is involved with wildlife activities. He lives in Dar es Salaam, Tanzania with his parents.

Nick van Lawick lives with his family in Dar es Salaam, Tanzania. He completed his schooling from Dar es Salaam Independent School and his college from John Leggott College.

After completing his college in 2018 he started working at the Entrepreneur Magazine.